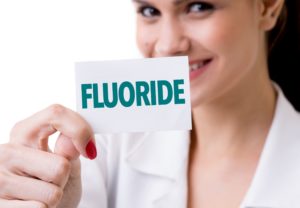 You’ve likely heard fluoride discussed on the news and social media outlets because there is controversy about its dental benefits. You might believe the discussions are relatively new, but fluoride is a naturally occurring substance. It is found all around you—from the soil you are standing on to the water you are drinking. Known as “nature’s cavity fighter,” the mineral strengthens the enamel to prevent tooth decay, which is why it is added to many public water systems. If you’re skeptical about its benefits, don’t stop drinking tap water yet. Here’s what you need to know about fluoride history and how it can safeguard your smile.

Fluoride is found naturally in the environment, but it wasn’t until 1901 when its potential dental benefits were explored. A recent dental school graduate questioned the cause of brown color splotches on teeth. Although there were many rumors about the culprit, he began a collaboration with other dentists and researchers. They discovered up to 90% of children in the area had stains. Their continual research led to the discovery of developmental imperfections with the enamel and extreme resistance to decay.

The physical and health differences between the primary and adult teeth caused researchers to turn to the public water supply. After examining the water, they found it contained high levels of fluoride. Not only did this identify the cause of the discoloration, but also fluoride’s role in preventing cavities.

Over the years, research continued to show the effects that fluoride had on dental health. In the late 1930s, they found fluoride levels below 1.0 ppm in drinking water didn’t cause aesthetic defects with the teeth, called enamel fluorosis. After determining safe levels, Grand Rapids became the first city in the world to add fluoride to drinking water to prevent tooth decay in the community.

Researchers continued to monitor schoolchildren. Within 11 years, the rate of tooth decay declined by 60%. Today, fluoride can be found in public water systems throughout the U.S., as well as toothpaste and other dental products. Your dentist can even provide fluoride treatment to strengthen your enamel’s defense against cavity-causing bacteria.

Safeguard Your Smile from Tooth Decay

Enamel fluorosis is still a concern; however, the National Institute of Health created specific guidelines to lessen the risk of the aesthetic flaw. Although they are preventable, at least 92% of adults have had at least one in a permanent tooth. While fluoride isn’t a substitute for brushing, flossing, and semi-annual cleanings and checkups, drinking a glass of tap water can give your smile extra protection to fight cavities.

Dr. Marks earned his dental degree from the University of Pittsburgh before continuing his training under the guidance of two of the most renowned dentists in the world. He focuses on prevention to create generations of healthy, beautiful smiles. If you’re ready to add fluoride to your treatment plan, contact our office today to schedule your next cleaning and checkup.

Comments Off on Discover Fluoride’s Role in Dental Health

Sorry, the comment form is closed at this time.