Love Brownies? Dentist in State College Says These Are Safe 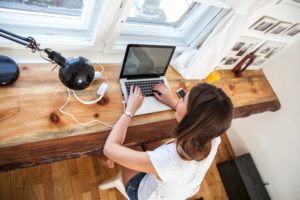 Everyone loves a sweet treat every now and then, but we know it isn’t doing our mouth or our waistline any favors. That doesn’t mean you should have to forgo brownies entirely though. Thanks to these recipes, it’s possible to enjoy a tasty treat without worrying about the health consequences afterwards.

Of course, sweets of any kind should be consumed minimally. The next time you want to make a batch, consider these three versions your dentist in State College found that reduce the sugar and flour content, without sacrificing flavor content!

Starches are made from white flour, and oral bacteria loves to consume this ingredient and release plaque acids that destroy teeth. However, almond flour can be utilized instead of white flour to create a significantly less starchy brownie. It also contains ingredients that are good for your oral health, including phosphorus, magnesium, and Vitamin E!

Because almond flour lacks gluten, expect a flatter brownie than usual. It’s also coarser and therefore needs a good binder like eggs and butter to keep the brownies moist. Patients interested in trying the recipe themselves can find it here!

For People on Low Carb Diets

What’s interesting about this recipe is that it uses an ingredient dentists love: xylitol! Xylitol is typically found in sugar-free gum, which is incredibly good for keeping saliva production high after eating a meal or drinking a big cup of coffee. By using this sugar alcohol in place of real sugar, you do your teeth a huge favor! It also makes use of almond meal, which is coarser then almond flour. If you find that your brownies aren’t quite up to your taste standards and don’t mind a few extra carbs, swap it out for almond flour instead.

This recipe also makes use of applesauce, which is a great way to reduce sugar and carbs in your diet. As a bonus, the recipe is only three steps, so those afraid of baking won’t have as much to worry about. You can find the recipe here!

A Brownie With 37 Calories?!

It might sound too good to be true, but according to this recipe blog, each brownie consists of 37 calories when cut into nine pieces. It combines Greek yogurt, oats, and stevia (which replaces the harmful white flour and sugar typically used in brownies.) It’s worth noting that by using Greek yogurt, patients can gain extra calcium, which is an essential mineral that strengthens teeth and bones.

Making brownies that don’t contain the typical flour, sugar, and other harmful ingredients makes you feel like you’re cheating! In reality, you’re just getting away with eating one of your favorite treats without the worry of tooth decay later. Just make sure to only eat one at a time!

The next time you try one of these recipes, your dentist would love to hear about it at your next scheduled appointment!

Dr. Donald M. Marks earned his DMD degree from the University of Pittsburgh. Since then, he’s completed multiple advanced education continuums through numerous organizations, including the SPEAR Faculty Club, the Scottsdale Center for Dentistry, and the Institute for Advanced Dental Studies. To learn more about his practice, contact him through his website.

Comments Off on Love Brownies? Dentist in State College Says These Are Safe

Sorry, the comment form is closed at this time.